Recently I received an email which asked me give my option on a phenomenon the analyst observed.

Observing high vibs on pressing and lifting pinion Drive End (DE) and Non Driven End (NDE) bearing on a ball mill. Motor and main Gear Box drive are OK. Clear predominant gear mesh frequency is appearing in the spectrum along with harmonics and side bands. But 1st GMF (Gear Mesh Frequency) is predominant. side bands with pinion speed is also seen. no Girth Gear speed side band was observed

Some of the vibration data, spectrums and photos shown in the attachment. Phase measurements indicate inconsistency in the readings near pressing pinion bearing. Impacts were also seen in time waveform data along with modulation.pinion speed 122 rpm.  On pressing side bearing 2.03 Hz side bands are seen, On lifting side i can see side bands spaced at 6.09 Hz (That is 3 times of pinion speed). Both Pinion lifting and pressing bearings are behaving differently. the vibs are high on DE as compared to NDE on both pinions. Can we suspect eccentric moment of the pinions with looseness. Why am i seeing 2.03 side bands on pressing and 6.09 side band on lifting side bearings. What is the significance of this. One sample of GG tooth photo shows uneven shining surface on either side (refer photo). In this case I am seeing  (30 T = 1 X 2 X 3 X 5) and (210 = 1 X 2 X 3 X 5 X 7) 2 X 3 X 5 as the common factor. Pinion 30 teeth and GG has 210 teeth. Will this create gear ratio issues uneven locking and releasing of 2 mating teeths. But no 1/2 or 1/3 or 1/5 GMF seen in the data.

But after a quick look this is what I see as the problem: –

This means that the pinion is badly worn out and as the common factor teeth mesh they generate these fractional frequencies.

Looking at the signatures it is clear that the GMF falls within 2.5 times the natural frequencies.

Also note how the GMF (60.6 Hz) falls right between two natural frequencies in both the vertical and horizontal  directions. (31.1 Hz and 83 Hz). This makes the situation worse.

2. From the time waveform, we can see vibration relaxation waves. It means that the wear out or damage is towards the addendum region of the pinion/gear
3. This means that the spray nozzles are wrongly placed or jammed. The nozzles must be placed after the gear mesh not at or before the gear mesh. Also ask the client to check for jamming of the nozzles and the present viscosity of the grease/oil and the quantity that is fed per hour.
4. We can also suspect eccentricity of the pinion and looseness.
5. There is a strong resonance. This appears to have generated from the top cover.
Regards
Dibyendu De
dde@rgbwaves.com
9836466678
Unquote
Deeper Lessons:

It is important to question as to what else we can do other than detect a problem or detect an incipient fault?

With the above analysis and information we can easily see the relationship between fractional GMF and lubrication and wear. It means we can build an algorithm that would warn us about an imperfect lubrication system that would in fact accelerate wear and put the system out of service.

Further, we can refine the specification of a purchase a gear box. The specification should state  — a) number of pinion teeth should be a prime number to prevent accelerated wear b) if a prime number can’t be achieved then the natural frequency in the three directions must be away from the GMF by at least 2.5 times the GMF.

Similarly, we can specify the gear box top cover natural frequency should be at least 4 times the GMF.

Scheduled running checks may include — a) rate of lubricant flow b) motor current c) placement of lubricant nozzles etc. 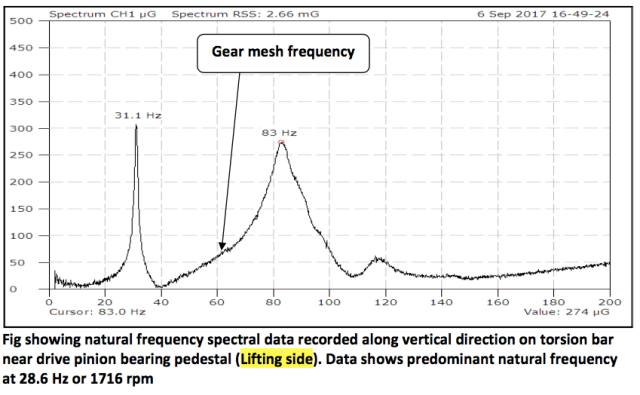 Details of the case: (relevant data)

Vibration data was recorded on selected bearing locations of motor, gearbox and pinion bearings
Data was recorded along horizontal, vertical and axial direction with 90% load on the mill

Time waveform recorded on pinion DE and NDE bearings clearly shows modulation which occurs due to above phenomena
Impacting of the gear teeth was also observed. Refer time plots provided in this report in subsequent pages

Only Side bands of pinion speed (2.03 Hz or 122 rpm) are seen, no side bands of Girth gear was seen in the data
The phase measurements recorded on pressing pinion DE and NDE along axial and horizontal direction shows the phase is not consistent with time suspecting looseness due to uneven movement of pinion

Vertical vibrations recorded on pinion DE bearing lifting side shows the vibrations are low (5 mm/sec) on one end while its high (11 mm/sec) on the other end even though it’s a common top cover of that bearing
For any normal 2 mating gears the selection of no. of teeth on each gear should be such that when factorizing is done no common factor should be found apart from 1 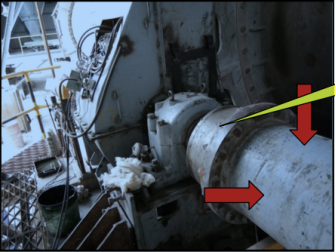 This site uses Akismet to reduce spam. Learn how your comment data is processed.

Signals that create a difference